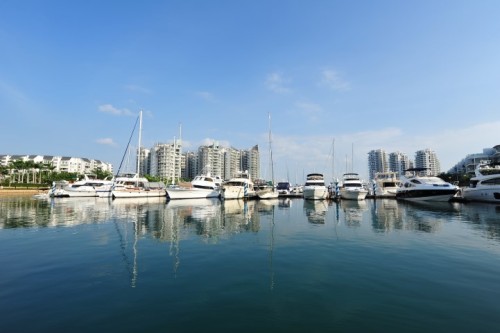 In ancient times, Singapore was ruled by a Malayan Kingdom called the Srivijaya kingdom. The Srivijaya Kingdom ruled most of today’s South East Asia, including Malaysia, Singapore and Indonesia. In 1299, a prince of the kingdom named Sang Nila Utama visited the island for a hunting trip. On the island he spotted a lion. Believing that this was an auspicious sign that would bring him prosperity, he named the island Singapura, which in ancient Sanskrit and Malay literally means ‘Lion City’. In the centuries that followed the Malay region was ruled by various empires, until the early 1500s when it was colonized by the Portuguese. At that time, the city Malacca in Malaysia was used as the key trading port. In the late 1700s, the Dutch colonized Malaysia. In the year 1819, Sir Thomas Stamford Raffles arrived in Singapore hoping to establish a port to help the East India Company to trade opium between India and China. He negotiated a treaty with the local rulers, and established Singapore as a trading station. Raffles also announced a free trade policy to attract more traders. Soon traders from all over Asia, the Middle East and America came to Singapore, and the country’s population increased rapidly. In 1869 the opening of the Suez Canal in Egypt greatly shortened the distance between Europe and Asia. This boosted trade in Singapore and added to its growing prosperity.
Until WWII. The Japanese took over from 1942 until 1945. After 1945, the people of Singapore wanted independence and the British started to slowly withdraw, granting a higher level of self-governance to Singaporeans. In the elections of 1959, the People’s Action Party won a landslide victory and the Singaporeans formed a full government. Lee Kuan Yew became the first Prime Minster of Singapore. In 1963 Singapore merged with Malaysia because the historic and economic ties between Malaysia and Singapore were very strong, and they wanted to continue as one country. But soon disagreements sprung up between the Singapore’s People’s Action Party and Malaysia’s politicians, which resulted in Singapore being separated from Malaysia again, becoming totally independent.

In the 1960s Singapore was known as a third-world country with poor infrastructure, lack of housing, large slum areas, and a high level of illiteracy amongst the population. Singapore didn’t have any fertile land for agriculture, nor did it have any natural raw materials to support its economy. But due to the country’s ideal location for shipping goods globally, the government turned Singapore into a manufacturing and trading hub. The government kept taxes very low and encouraged free trade. For this reason Singapore attracted many foreign investors who came to the country to set up businesses. The government encouraged this and hired international corporations to provide skills training for the locals. The banking and finance industries were encouraged by lowering taxes and reducing heavy regulations. The government ran an extensive campaign to build infrastructure and provide housing for the poor. The government also invested heavily in education and declared English as its national language to truly globalize the country. Today Singapore is a vibrant, well-developed and rich country with the highest GDP per capita in Asia, and amongst the top 10 countries in the world with the highest GDP per capita.

Singapore’s main industries today are trading goods, exporting petrochemicals, its huge service and tourism sector, and the impressive banking sector. Singapore has attracted assets that were previously held in Swiss banks because of taxes imposed on Swiss accounts, and the weakening of secrecy in Swiss banks. Singapore also has industries generating significant revenue such as high-tech goods manufacturing, pharmaceuticals, aerospace engineering, and research and development.

The British embedded a boating culture in Singapore. The country’s first yacht club was set up in 1827, called the Singapore Yacht Club. In 1843 a well-known officer in the Royal Navy, Sir Henry Keppel was sent to Singapore to fight pirates that were present in Singaporean waters. During that time, Sir Keppel umpired a regatta that was organized by the Singapore Yacht Club, which has since become a local tradition. Singapore also has a boat manufacturer that manufactures trawler-style boats, a brand called Grand Banks, which was relocated to Singapore from Hong Kong in 1973. As a result, Singapore has experience of building and exporting pleasure boats overseas. Leisure boating was not as popular with the locals until the 1980s and 1990s, when modern boats started to arrive in the affluent city, influencing taste and culture. More marinas were constructed during and after the 1990s, as more people started to buy pleasure boats. Currently, in 2015, Singapore has seven main marinas with professional berthing and mooring facilities, and around 4000 licensed pleasure boats in its waters.

Singapore’s tax on pleasure boats is 7%. The boating industry is well developed and there are all types of facilities for yachts. Singapore yacht clubs also hold regular regattas every month, and these races are very popular amongst boaters. Although the number of pleasure boats in Singapore is less than half compared to Hong Kong, Singapore is a smaller country with an area of 716 square kilometer and a population of around 5.5 million, compared to Hong Kong’s area of 1,104 square kilometer and a population of around 7.2 million.. Both these countries are the main boating markets of Asia and are going through similar problems in terms of a lack of space to moor boats. This lack of mooring space is a massive deterrent to the market. One of the downsides to the boating industry in Singapore is the lack of space in the water for cruising, due to parts of the coastline being allocated to container ports, petroleum refineries, or military restricted zones. There are also not many islands in Singapore waters. There are however a few islands on the south of Singapore, like St John Island, Seringat Island, and Lazarus Island. These islands are frequently visited by boaters and have good cruising and fishing grounds. There are some other islands that are also accessible when there are no military training drills.

Singapore is also very close to the many islands of Indonesia and Malaysia, and when boaters are ready to cruise a bit further, they can enjoy great locations. Singapore is very stable politically, and is also one of the top ten tax havens in the world. As a result there is a concentration of billionaires and millionaires who settle there from all over the world. Professionals in Singapore are also amongst the highest paid in Asia. With developed shipyards and yacht clubs holding regular regattas, Singapore has a lot more room to grow its boating industry. What is needed to ensure growth, is to make more space available for boats, with affordable prices, and getting more middle- and upper middle-class people into the boating scene.

we hope you found this article interesting.
Until next time